n.b. I'm creating this post as a guide and canonical reference for why an answer to a question that lists a different culture may not always be appropriate and acceptable.

As you may already have heard, Interpersonal Skills Stack Exchange is a place for asking and answering questions about specific social interactions. Sometimes, answering these questions may prove to be a little bit difficult, answers will always require knowledge and awareness of the specific circumstances surrounding the situation, and the society and culture from within the situation is formed. For this reason, we also expect the same from questions as well.

Answers to questions will generally derive from your personal experiences, or from credible references that you have found elsewhere. Under the site's Back It Up! Rule, this is required.

But sometimes, you just may not be familiar with the culture, society, or situation that the asker is in. You may feel compelled to answer with your own experiences or knowledge, even if it may not be relevant to the question. Answering with "related" ideas is wrong, and we are here to tell you why.

The issue of "related answers": Why your Pakistani answer may not work for India.

There's been a lot of chatter about the need for cultural sensitivity of this site, and the need for the community to understand that their experiences may not apply to others. The context for this has been stated very well by HDE2286868, in his answer to Just the facts ma'am. Or reigning in answers:

Talking about a different country might not help anyone. If I ask a question about Y in, say, Trinidad, and someone gives me an answer about Y in Indonesia, then there's no guarantee that that answer will ever help anyone else. Who knows if an Indonesian will ever have this problem? That's my counterargument to the fear that limiting questions to one country will lead to an explosion of questions on the same topic but for different places - the odds of people in so many different regions having the same questions are slim.

Trinidad and Indonesia were used as examples there because they offered good contrast. But what about answers for countries that appear to be culturally and societally similar? For the rest of this answer, I'm going to use the three largest countries of South Asia: India, Pakistan and Bangladesh.

You're probably wondering, but wait Ziz! India, Pakistan and Bangladesh were once united, and they've grown together! You're right, but also wrong. Each country has different demographics and politics. Even within each country, there are stark differences between cities and states. The state of Kerala, India is very different from the state of Gujarat, India. Even the Pakistani cities of Islamabad and Karachi can have many differences.

That said, all three countries, states and cities do have elements of culture that are common. They have similar faith traditions, they may have common languages (despite the fact that India along has over 1700 languages), diverse peoples... This is also something that can't be ignored.

But I haven't really provided you with many examples. So I'm going to show you Geert Hofstede, who was an anthropologist who created the Cultural Dimensions Theory. The theory attempts to objectively determine cultural tendencies and attitudes through six areas:

Now that you have an overview of the theory, how do the three countries compare? 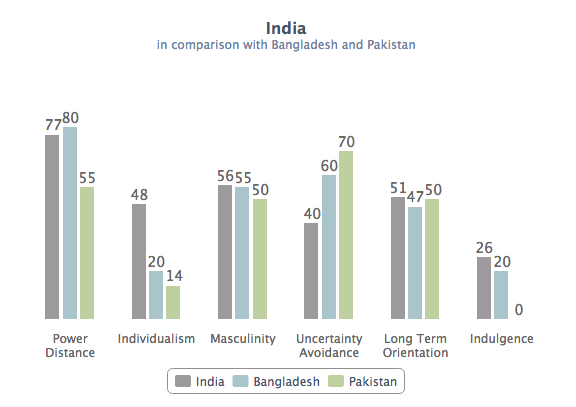 Source: https://geert-hofstede.com/india.html | Add Pakistan and Bangladesh to the chart to replicate the graph

I'm not going to give you an analysis of each culture under the theory, but the graph displays quite well that each three cultures have both their similarities and differences, despite being from the same region and often being classed together.

The point is, cultures and societies can be awfully different, even if they appear to be similar.

How this affects our answers

Since all of our answers need to be supported by credible reference or personal experience, and now that we've established that even cultures that we consider to be similar may be very different, there are still a few points to keep in mind:

Not the answer you're looking for? Browse other questions tagged discussion scope answers cultural-relativism .

17
How do I write a good answer?
19
Do we want references in our answers?
3
Would it be appropriate to ask for answers from people with specific backgrounds?
11
Is this site, essentially, a centre for primarily opinion-based questions?
10
Why doesn't this site have a back it up rule?
21
Moratorium on Hot Network Questions until we have greater control over content
6
Unpinning accepted answers, or not?
17
What should we do about answers based on the 'wrong' culture?
7
Are long answers part of the culture here?
15
What sort of expert questions do we want?
See more linked questions

1
Globalisation and intersubjective communication
4
Can answers be off topic? - How to deal with answers that address legal issues
14
Rewarding the best answers in the first 50 days of Interpersonal Skills
16
100 days has gone by, time to reward your hard work!
1
To what extent should subcultures be on-topic?
4
How can we encourage/enforce the backing up of answers?
8
Do we have a problem with people answering questions that they don't know the answer to?
5
Can we start enforcing the "back it up" policy?
4
Call for contributions about finding examples of great questions and answers