Should we be using the Europe tag?

The Europe tag has been used on some occasions, and there have been some edits trying to remove them in favour of specific country tags. Europe is indeed diverse, but their are some points that do seem to be trans-European. Issues involving things such as holiday (vacation) locations, or areas with large ex-pat populations come to mind.

Should be using a general Europe tag for these? Or should we broaden the tags beyond the Europe vs. France/UK/Germany divide, to include "Mediterranean Europe," "Central Europe," or "Scandinavian Europe" type tags?

For some issues, the answer will differ from country to country. For some, from continent to continent, for others even from city to city.

Since we have no tag hierarchy, we can't simply tag a question amsterdam and have the-netherlands, western-europe, europe, and big-city inferred or implied.
Neither can we tag a question with all those tags, because we only have five tag "slots" available.

There will be questions where europe is the right level of locational precision. And so we will need europe.

Tags will be used incorrectly or mistakenly, but that is no reason to delete an entire tag.

And sometimes, the location isn't so much the deciding factor as for instance religion, type of work environment (blue collar vs. white collar), profession, and so on.

Sometimes europe will be the right tag: when the location is relevant and it is the right granularity.
And sometimes it won't be, either because it's the wrong level of precision, or because location is not as relevant as five other tags.

What is the best way to deal with "reserved" seats at place like a hotel pool?
Currently no locational tag; europe may even be not broad enough here.

How can I notice if someone is speaking with sarcasm or irony?
Specifically stated by the OP as being asked "from a European country"; we have no finer level of locational detail available.

How to deal with a dangerous, developmentally disabled person I can not avoid?
Currently tagged the-netherlands. However, europe or perhaps western-europe would have worked as well. While the legal measures the OP may take against the individual can differ from country to country, the interpersonal skills needed to deal with him differ less.

How do I indicate interest in going somewhere without inviting myself along?
Not europe, but united-states which can be overly broad as well, since etiquette for this issue may very well differ from one state or region to another.

How to say "I'm an adult now" to my parents?
This has indonesia, but Indonesia can stretch from Ireland to Moscow, with a number of different islands; several large ones and so many small ones that even Indonesia itself doesn't know how many exactly. While predominantly Islamic, the Indonesian part of New Guinea is largely protestant, and there are some Hinduistic "enclaves". 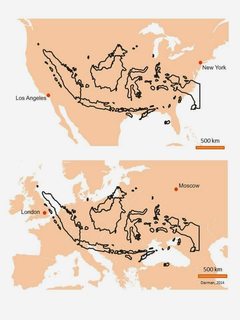 As with the USA, country may be too coarse a level of location.

How can I recover from a bad first impression on the internet?
Location is irrelevant here. The cultural tag used is stack-exchange.

How do I indicate sarcasm/irony online?
No location given nor needed; tagged online-interaction.

We need to take into account culture, more so than countries. Sometimes a question may be specific to the culture of a specific country, continent or a conglomeration of places globally.

I think the country tag can be too narrow at times and we risk micro managing the site.

For example: How do I react when a girl I like has a new haircut that I don't like very much?

which has been discussed at length here:

Why can a question be closed with only 2 votes?

If the OP is happy with the europe tag - then that should be fine, although it seems applicable to a broader community to me (although there's distinct cultures within Europe). It would probably apply to an Australian culture also. A western-culture (please feel free to make a better suggestion) tag may be more appropriate.

There's many questions, I've written in the australia, that I would prefer to have a broader cultural tag.

Then there would be other questions where the country tag is relevant.

How to deal with a running nose in Japan?

This is a question that is specific to this type of culture, as the attitudes towards hygiene vary greatly across Asia. An example being spitting in public.

Perhaps we can combine a specific country tag with a cultural tag (where appropriate) - the only problem with this - is we become cultural/location heavy with the tags.

Some thoughts to consider...

To decide this, we have to figure out how useful these tags are. Having a tag for each individual state/province of most countries is a bit much, but regions can be appropriate - for example, regions of the U.S. can be rather different from each other in terms of culture, but I'm not sure that's true (I might be wrong, of course) for the provinces of Canada.

Some tags concerning continents are a little more useful than others. The key is to consider whether there are countries within that continent with such drastically different cultures that there is very few useful things to ask questions about in common. I personally don't know enough about Europe to know whether that's true, this is merely what we should be considering. And perhaps a more narrow tag, like european-union (though who knows if that's actually useful), is better.

Many different cultures will have big similarities to each other, but they remain different cultures. And although there are some things which would be broadly the same across Europe, the fact is that Europe is a continent of many cultures. Although many societies are multi-lingual, it is reasonable to think of a country-language combination as the base unit of culture, especially for this site where most of the interpersonal skills we cover are impacted by communication conventions which makes them language dependent. The dozens of languages of Europe therefore mean dozens of cultures, which makes a "europe" tag too broad for most questions.

One exception could be a combination of "europe" and "tourist". Expectations of tourists in Europe would be much more united than they would be between a European country and a South Asian country for example.

If country-language combinations are the basis of our culture scoping, then most of the time a "usa" tag will be sufficient. State level tags are probably unhelpfully specific. But a "hispanic-usa" tag (or "hispanic-american"? I'm not sure what the conventional labels would be) could be appropriate and useful.

We should use country tags. Country tags are simple to define, and in most cases they offer enough level of detail to serve as a tool to help people find questions to answer. Continent tags are too broad to be useful.

Yes, there are differences between regions of countries. But tags are supposed to help people find questions, not communicate every little detail of a question. Use the question body to add more information and elaborate. Or, if there's a consensus that for certain countries state or region tags are more useful, eg you think it's worth creating a tennessee tag or an american south tag, then go for it! Just please don't create continent tags, which are too broad to be useful.

For the rare question where the answer is the same across Europe, there is nothing stopping you from voting to close a Spain question as a duplicate of a France question. But if you keep the Europe tag around I guarantee it will get misused.

Not the answer you're looking for? Browse other questions tagged discussion tags specific-tag .

4
What should the usage guidance be for tags where that aspect has different levels of granularity?
1
Why can a question be closed with only 2 votes?

5
Should we keep the [interaction] tag?
5
Let's remove the socializing tag
6
Should we make a "jealousy" tag?
1
Is the tag "latin-america" more accurate than using the tag "south-america"?
1
Should we rename the "conflict-aversion" tag?
3
When can I use the lgbt+ tag?