I want to talk about comments today.

You may or may not be aware, but we get a few comments here. Even if you think we get a lot of comments, you may not be aware of how many... and I'm actually not, either, because the system has only a partial count of comments because, as we all know, comments are temporary and sort of second-class citizens in the SE world.

So, what I want to see is some data so that we can decide if we need to do something about the sheer volume of comments we get. I have been able to use a SEDE inquiry to get info about the number of comments that currently exist on each post... or at least existed the last time the SEDE query ran - Sunday the 27th - as of right now the site reports that we have 394 questions and 1822 answers but these numbers are a bit wonky. This has been updated since the first posting to reflect a more recent SEDE query.

The majority of answers have no comments - 931 vs 844 for a total of 1775 answers but they add up to 2863 total comments on answers. So, this represents about 1.6 comments per answer, though if you exclude answers with zero comments, you get a little over 3 comments per answer.

Most of the questions have comments, though - 45 vs 337 for a total of 482. This is probably expected. We want to help people improve their questions, which requires comments. In total, there were 2045 comments on questions the last time SEDE ran. This means that, on average questions get a little over 4 comments each or a little over six per question if you exclude those with zero.

While this doesn't sound too bad, there are 58 questions and 38 answers with ten or more comments each - up to 29 comments on a single post.

Also remember what I said earlier - this data is incomplete. This represents only non-deleted comments. Any comment deleted by either the moderators or by the user who posted the comment or through flags aren't included in this count.

I can add a little bit of light to that. As a moderator, I can see a count of total moderator-deleted comments (includes CM deletions). That number is 1544 (as of right now, not when SEDE ran). You read that right. In two months, we have deleted over 1500 comments - or about 24.5 per day. Compare that to the total from the SEDE query, that's about 1/3 of the existing comments, so about one in four comments ever posted on this site have been deleted by a moderator.

A - smaller, I assume - number have been deleted by the person who wrote them, through abusive comment flags, or have a keyword that makes them auto-delete with one "no longer needed" flag. I don't have numbers for that.

So, what I'd like from a CM is the rest of the data I'm missing - or as much as the system is able to serve up.

If it's possible, I'd also like to see the correlation between deleted comments and posts on the HNQ list. I know there's no "tag" for HNQ posts but I think we can safely say that if views > 1000 it was on the HNQ, since the site is new enough that it's uncommon for non-HNQ posts to get that many views. Giles made me a query for existing comments in SEDE here. It's pretty nifty but doesn't take into account deleted ones.

I'd also like to know how many auto comment flags have been raised by Community - these flags are raised on a post that gets more than 20 comments. We get a lot of them but they're not tracked. There's an MSE post that seems to indicate that you can give us that data, too.

If I'm reading this correctly, your goal is to get something of a high-level picture of how comments are used (and abused) on this site.

The following data covers all comments posted on Interpersonal Skills for its entire history, unless otherwise noted. It includes deleted comments and comments on deleted posts; the latter are treated identically to comments on visible posts.

Oh... And there have been 46 "Too many comments" auto-flags raised during the life of the site. Since that's boring, here's a chart of those flags by week: 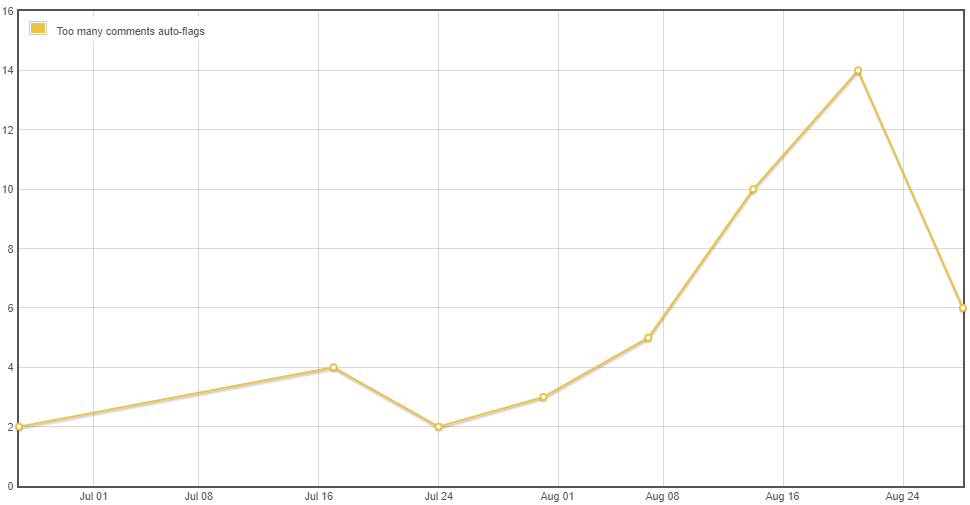 What I found unusual, coming from English.SE myself, is that as you observed in your question,

The majority of answers have no comments

This is unusual based on my experience at ELU, though I am aware that comments pattern can differ widely from site to site, and ofcourse IPS.SE is still in beta.

Based on your wide experience with multiple Stack Exchange sites, you might be much better placed to decide whether this is in any way unusual, @Catija.

Have other members noticed anything else significant about comments?

Not the answer you're looking for? Browse other questions tagged support comments .

127
What caused this site to be excluded from Hot Network Questions?
69
Please don't write answers in comments
-2
Some thoughts on the moderation of comments on this stack
1
Can we improve upon the Be Nice policy here as a model for the rest of SE?

1
With no reputation, can I somehow answer a blocked question because it attracted low-quality or spam answers?
2
What isn't rude here?
7
How is this comment necessary?
5
How is the community doing at deleting answers flagged as Not an Answer?
14
Is it time to cut the canned comments?
14
Does IPS moderate comments differently from the rest of the Network?