I posted three or maybe four comments beneath this question

How to tell a non-muslim friend that "Inter-faith Marriage not gonna work"?

The first one, which seemed to have met up with some consensus, mentioned that the OP's questions had planted the seed of doubt in his friend's mind, and that it was important to discuss religious differences and the upbringing of children before marriage (or words to that effect).

Another comment asked the OP to reflect back on how he talked to his friend, and that tone of voice and body language is important in communication. Anyway, I'm used to EL&U deleting off-topic comments, but the comments today were on topic, and the OP's reply, which is still present

does not make sense without knowing what was said previously.

Were my comments offensive or inflammatory? Were they deleted because they were considered "answers"?

They must have been flagged by more than one member of the community, so can I ask why those comments were flagged and subsequently deleted?

Here is a screenshot of the comment section as it appears now. You can tell comments have been deleted, the thread is interrupted and disjointed as a result. 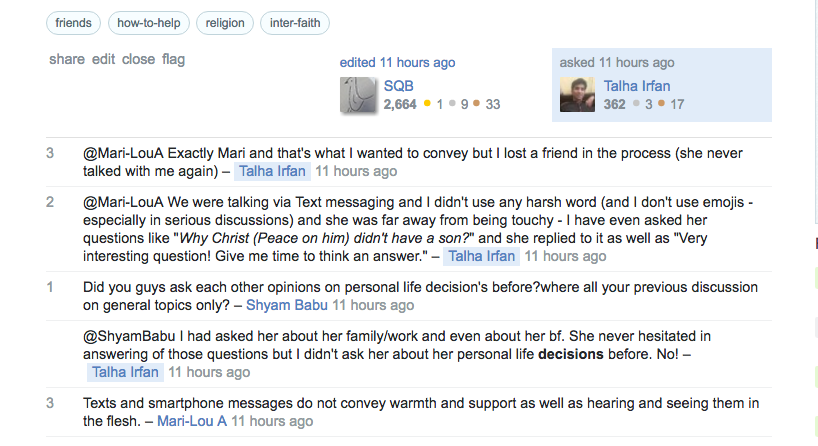 The two comments were deleted by a mod. The reason for the deletion is mentioned in HDE 226868♦'s answer, which states the following:

The two comments were received positively. In fact, neither one was flagged by anyone in the community. The comments were not misleading, inaccurate, or false. Comment No. 1 was my modest attempt to connect to another human being. I wanted the OP to be aware that his (gentle?) inquiry could not be lightly brushed off or ignored (the seed of doubt). By itself comment No.1 does not constitute a fully fledged answer, it was meant to comfort more than anything else.

Besides, if I had posted an answer the following would have happened: Someone would have posted a comment asking me what experience I had with interfaith marriages, what evidence was there to support my answer, whether I was qualified to answer, and why I thought my suggestion would work.

Those kinds of comments have effectively discouraged me from answering more questions on this site. I suppose the commenters might argue: "Mission accomplished!"

Comment No.2 was left because it was important to know how the OP spoke to his Christian friend.

Funnily enough, mods leave comments all over the place on ISP, so it's one rule for the community and another for the moderators. All users are equal, but some users are more equal than others.

Does he post comments that ask the poster to clarify? No, not always. Admittedly the comment below was posted two days ago and in response to Catija's. However, may I suggest that both comments served their purposes, and should have been deleted by now.

@Catija Heh, my sister's done that to me in the past. :-) To be honest, in a situation like this, playfulness can be really good at some ages and not-so-good in others. For a teenager (even a young one), I'm imaging mixed reactions. (0 upvotes) link

Obviously, he doesn't fall in the chatty category. In fact, you barely feel his presence on the site, I suspect he works silently in the background whereas @Catija ♦ and HD 222...♦ seem to be very hands-on type of mods. Nevertheless, no one is immune from leaving off-topic comments or helpful suggestions...

How many comments have I posted? Well, not counting all the comments I have deleted, and those that were deleted by others the grand total is 37 comments but I have been a member for only 27 days.

I'll post the text of the two comments of yours that were deleted, just for posterity:

You've planted the seed of doubt, she'll probably not admit it, but she's already thinking about what you said. Religious differences and the upbringing of children should be discussed before committing oneself to marriage.

I'm sorry to hear that. Give her time and space she might come round. In the meantime think back to when you told her. Were you clearly concerned, or did it come across as being harsh and critical? The tone of voice and body language speaks volumes in these situations.

Both comments were manually deleted by a moderator early today (not by the system). I wasn't that moderator, but I'm about 95% sure that they were deleted because they were partial answers to the question - something we're really trying to discourage.

I'm not going to rehash the whole "don't-answer-in-comments" policy; that's been outlined in detail before. But here are the key takeaways:

TL;DR: Answers should be written as . . . answers. Answers written in comments will likely be deleted.

For what it's worth, I've now deleted the comments made by the OP in response to yours, just to tidy things up.

I think a more precise understanding should be that back and forth discussions should be avoided in comments (the whole "comments are temporary" topic that is often discussed).

A third point is that this avoids question unrelated (and sometimes heated) discussions in comments that maybe should be separate questions, or put into an answer. The handling of these (questions and answers) is better documented and more precise than for comments.

Thanks to the Almighty Internet, I found the Original Post and the two helpful comments. They are not meant to be answers to the question. They are not harmful to the OP. They are not detrimental to the site. They were simply meant to lend moral support. 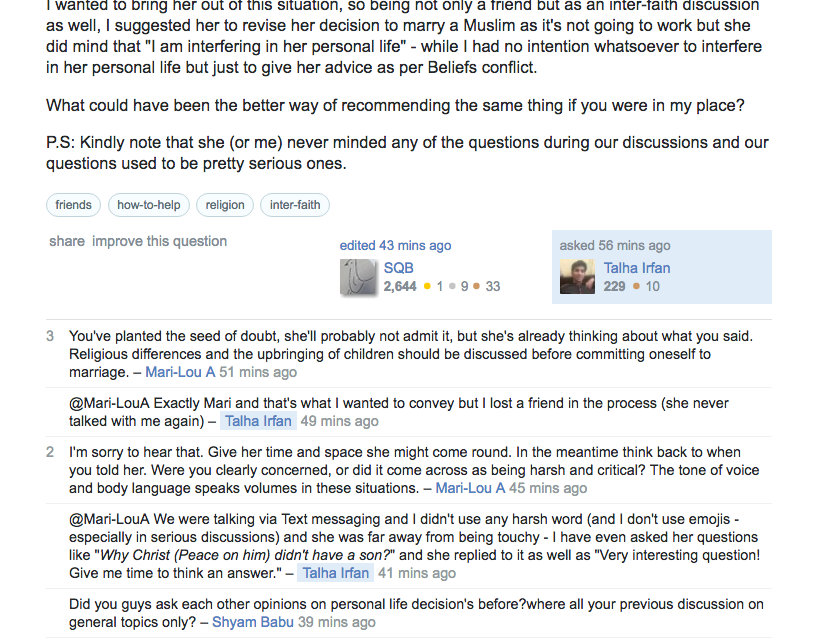 HDE226868♦, who is one of the three mods assisting IPS, in an answer to this question wrote in an impassioned plea (emphasis his not mine):

If you're too lazy to write out a full answer, or can't be bothered to think things through fully, or think it's just not going to matter . . . then don't write an answer in a comment. link

The same mod in a comment written on this page argued:

Comments aren't for answers, period. They're not there so people can feel comfortable writing posts that wouldn't be well-received as answers

but in response to a user's answer, not a comment, scolded

So . . . why do you think this method would work? What do you have to support it? It seems more like conjecture.

The following screen capture shows what the post looked after the comments had been arbitrarily deleted by a different mod.

10
Here a comment, there a comment, everywhere a comment - How many comments do we get, anway?
14
Why were comments pointing out potential bad advice in an answer deleted?
6
Is there a (winter-bash) hat that can depict the IPS.SE?
1
My comment in the question about farting got deleted
1
How to give advice to OP when comments are deleted and not moved to chat?
2
What is the consensus on valid comments where the post has not been edited in quite a while?
1
Why are my comments being deleted before I can even read the answer to them?
7
Could we take measures to alleviate some of the exasperation from deleted comments? Should we?