Are examples strictly necessary on meta?

It seems like most of my questions on this meta, regardless of the subject, receive comments asking for specific examples of the issue I'm trying to address. I understand that concrete examples can clarify some issues, but in many cases these comments feel more like:

Links or it didn't happen.

I prefer to avoid putting other users on the spot, and I really, really don't want to incite a mob to go after any specific post or user. The meta effect is a thing after all.

When we talk about issues on this site is there any way that we can, ya know, do that without pointing to specific users or posts?

Not everyone has read every question and every answer on the site. A problem that is obvious to you might not be obvious to others. Examples help bring people up to speed.

I've also seen plenty of meta posts that make claims such as "we should stop closing questions for [x reason]" only for someone to come along and say, actually, I closed those questions because of [y reason], not [x reason]. Here's an example. Examples help the community verify that the problem you're describing in your meta post actually exists.

What follows is a bunch of writing designed to address some of the concerns raised in this meta question.

I understand that concrete examples can clarify some issues, but in many cases these comments feel more like:

Links or it didn't happen.

Reading this, it seems like some of the issues you have with these comments is (1) perhaps the tone of the comments, or (2) you feel that the comments are a way of expressing skepticism of whether a problem actually occurs.

As for (2), if someone is skeptical that something you are describing has actually occurred, there is a really easy way to fix that: provide an example. This doesn't necessarily mean that the person asking for clarification doesn't believe you; perhaps they don't read every question posted on the main site and they genuinely have no idea what you are talking about. (Another reason why examples are helpful).

I prefer to avoid putting other users on the spot, and I really, really don't want to incite a mob to go after any specific post or user. The meta effect is a thing after all.

A "mob" is what you should be aiming for. Meta posts usually have a goal. Maybe they want a question closed, maybe they want a question opened. Since Stacks are mostly democratic, it takes multiple people to get something done. Multiple people = a mob. Pointing a mob towards problematic content is exactly what you should be doing. (Something something if members of that mob aren't being nice, flag for moderator attention).

If you're asking about an issue that you've observed more broadly is it necessary to point out a post or user?

Yes. (1) If people haven't noticed this issue, without examples they won't know what you're talking about. (2) Even if it's a broader issue, usually there's a specific outcome (e.g. "questions with problem x should be closed"), and that specific outcome will be facilitated by listing examples.

If you're worried about people targeting people rather than content, then make your post about content, not people. You shouldn't be writing meta posts such as "Hamlet is the worst person on the site, he won't stop using comments to ask questions to specify location". Write "is it necessary for questions to specify the OP's location" and use one of my comments as an example. This is Stack Exchange; unfortunately criticism of content (such as downvotes) is part of the very mechanisms of the site. As long as you keep the focus on content, not people (focusing on people violates be nice), and as long as the criticism is constructive, you are fine.

Don't take my word for it. This is literally built right into the system: 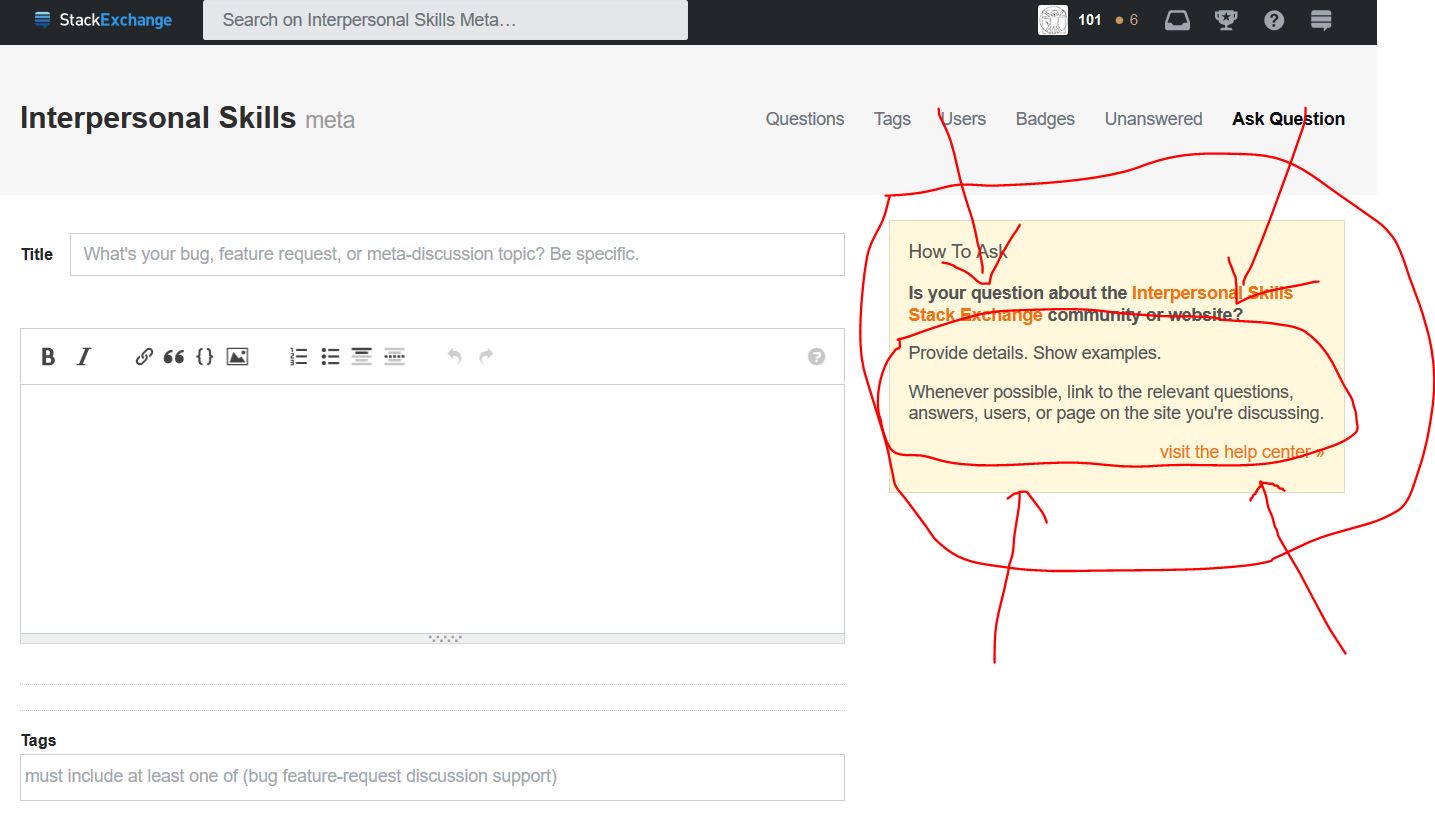 If the Stack Exchange software tells you to do something, it often is a good idea to do it.

Not the answer you're looking for? Browse other questions tagged discussion comments meta .

4
Should we close questions where underlying assumptions are not supported by evidence?

10
Should we encourage the use of stock comments on this site?
0
Was the question about learning to pick battles handled appropriately?
1
Could we be a little better about not chiming in?
15
UPDATED: COMPLETED "On Topic" help page contents are live
15
How do we engage more people to contribute on meta, to create a wider mandate for our policies?
1
Can we start writing "There is no established etiquette" answers instead of closing as primarily opinion based?
7
Are We Striking a Good Balance Between Accomodating Askers and Accomodating Answerers?