Should we be more accepting of more "trivial" edits when reviewing suggested edits?

I'm already well accustomed to the fact that, in order to have your edit accepted and to gain that valuable 2 rep, that the edit is not trivial. Trivial edits should usually be left to the people who can edit posts instantly, without needing to have their edit reviewed first.

However recently I've been thinking how this rule, matters less while a site is in it's private beta (or even it's public beta) as during this time we need to make sure our questions are spot on, trivial edits for questions that might become viewed by thousands and become the center of the site's questions may well be very important, if they seem trivial at the time.

So when reviewing edits during private and public beta (I'd prefer separate answers for these 2), should we be more accepting of trivial edits?

Here are a couple examples of edits on main sites I suggested but were rejected for this reason, this is the general idea of "trivial" I am describing:

(sadly this appears to be the only one I can find, but by "trivial" I am describing minor grammatical/spelling errors)

Edit rejections are something that comes up in meta on every site I've used, including MSE... Every site has their own idea about what makes something fall under "no improvement whatsoever". I tend to focus on readability while letting the OP maintain their voice... and that's even when I have the ability to edit without approval.

Do we want questions to be clear and readable? Most definitely. Every site has a six-character minimum for edits when you don't have sufficient reputation but even single-character edits can be vital to a post's readability. The six-character limit is designed to encourage newer editors to find more than one error to fix, as it's not uncommon for a post with one error to have several. We should be reviewing the entire post when we edit, not just one small part of it.

I personally see the edits you made in your example to fall more into voicing than readability but it really depends on the site. "Gonna" is normal vernacular, particularly on the informal world that is Arqade (I assume a Skyrim question comes from Arqade). Starting a sentence with "but" may be a bit messy but it's not really that big of a deal.

The "no improvement whatsoever" text reads:

This edit does not make the post even a little bit easier to read, easier to find, more accurate or more accessible. Changes are either completely superfluous or actively harm readability.

We should take this explanation quite seriously and welcome any and all edits that actually improve the question, regardless of whether we consider them "trivial" but that doesn't mean that we need to edit posts to remove any personality from them.

So, yes, please change unnecessary abbreviations, grammatical errors, spelling issues, punctuation and formatting but be considerate of the OP's voice when doing so. As long as you can make your edits pass the 6-character minimum, please help improve the posts here and, if you're reviewing, please take the time to look at the edit and see if it fixes valuable things. I've seen several edits rejected (on other sites) that I think should have approved but because all they did was fix a letter or two, they declined them as trivial... that's not the definition of "trivial" when it comes to edits, though. In fact, the word "trivial" doesn't appear anywhere on the rejection reason list. 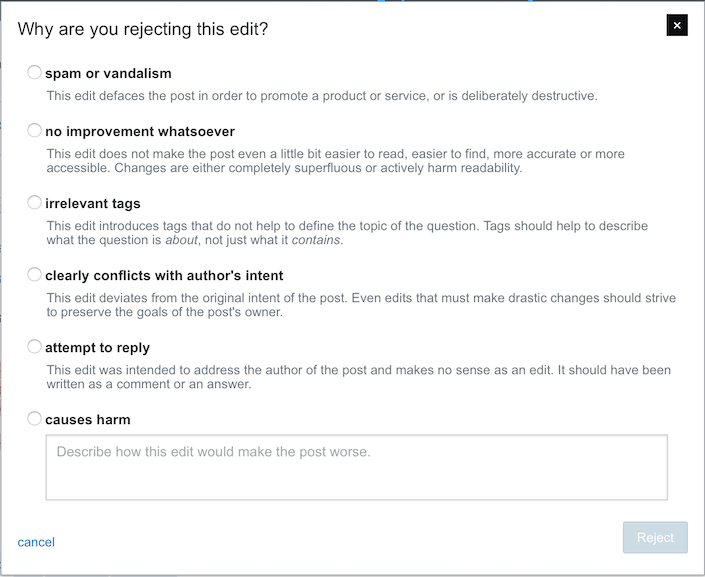 Remember, there's now a feature that allows the OP to unilaterally reject (or accept) an edit even after it's gone through the review queue. So, if the OP actually liked your edit after it's been rejected, they can accept it and you still get the points... but if it's accept it and they later reject it, you lose them.

I don't really see that there's a difference between how we should react to this between public and private beta.

Trivial edits are discouraged for two reasons. 1, people may get annoyed at you for doing them, either op for editing their post, or someone whining that trivial edits are being made, and 2, to train users to look for more things to improve. The 2nd is enforced for low rep users through minimum character requirements and peer review.

See Why are trivial edits discouraged?

Not the answer you're looking for? Browse other questions tagged discussion editing .

5
When we should start reviewing/merging/deleting/discussing tags for the site?
6
Should we wait for more votes before acting on "community consensus"
6
Should we encourage using placeholder names more often?
13
Should we be more strict about one-line answers?
0
How can we be a bit more accepting of new members?
4
How can we encourage more discussion when voting to close, or why is it not happening already?
12
When should mods remove questions from HNQ?
2
When a question mostly brings frame-challenging answers, should we try to edit it?