Why was my answer deleted?

The following was my answer to this question - Is mentioning that a synagogue is located in a well off neighbourhood a racist remark? 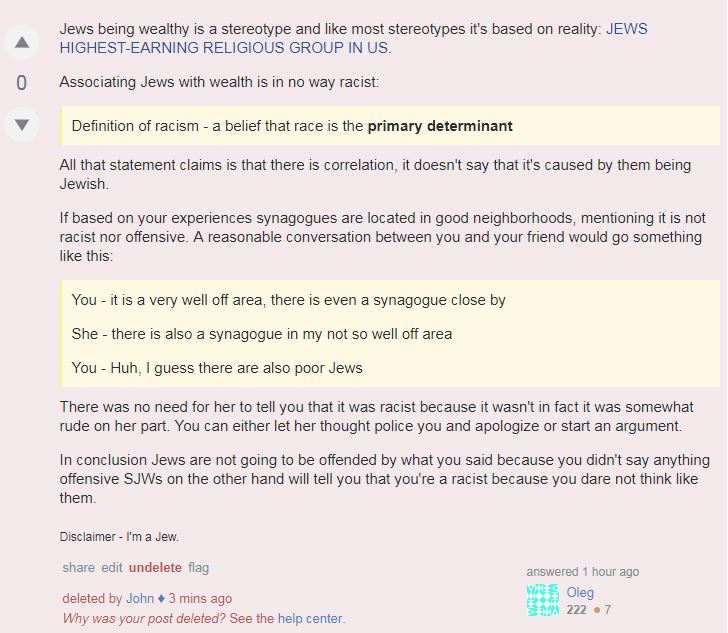 That was an honest and polite answer, had 5 upvotes and downvotes, was accepted by OP and directly answers the question. Why was it deleted?

I wasn't involved, but I would have flagged it for deletion if I'd seen it.

First off, you answered an off-topic question. Note that the other answer there responds to an on-topic IPS question, apparently based on comments; that's not ideal either, as the question hasn't actually been edited to ask that, but it at least tackles an IPS issue.

Your answer doesn't address an IPS issue. Yes, you answered the question that was asked, "is it racist", but that's not a suitable question for this site. If you think that's the question, you should have voted (or flagged) to put the question on hold, not answered it. If somebody were to ask for help debugging his JavaScript and somebody were to actually answer that here, then it helping the OP wouldn't protect it either. Don't answer questions that should be closed if you mind your answers getting deleted.

But you didn't even give the OP any advice. Well, unless you consider the implicit "ignore it" in your answer to be advice. Answers here need to address things the OP can do, not how you feel about other parties in the interaction.

Your answer probably would have merely been flagged Not An Answer and deleted from review if not for closing. First, you extrapolate from your own opinion to all members of the group, even throwing in "I'm a Jew" as if that means anything more than whether you are offended. That's something that people looking to start arguments or defend positions do. It's the "well I'm not offended, so there must be something wrong with you if you are" tactic that leads nowhere useful. Whether that's what you were doing would have been ambiguous, had it not been for your further comments about people who "will tell you that you're a racist because you dare not think like them". It doesn't matter who you're talking about; that's soapboxing, not attempting to answer a question.

Add it all up, and I'm not surprised it got some "rude" flags and was deleted. Had it been deleted by the community through flags, by the way, you would have incurred a 100-rep penalty. The moderator who just deleted it did you a favor. You're also able to edit it and ask for undeletion, which also wouldn't have been possible if it were deleted by flags.

Not the answer you're looking for? Browse other questions tagged support moderation deleted-answers specific-answer .

18
How to respond to posts that are primarily soapboxes for political viewpoints - either for or against?

0
Why was my comment deleted?
2
Why was an answer I liked deleted?
5
Why did my answer get deleted?
3
I can't find my recently deleted answer
4
Are users notified by the site when their answer gets deleted?