It is time to expand

I feel that it is now time to expand the site's scope to cater to the audience's needs.

(a) for relationship advice,

(b) how to phrase their ideas,

(c) how to write emails with good etiquette,

(d) for advice regarding how to handle conflict - in particular, help with the decision-making process.

It is natural for them to come here with such questions; I'd think that 95% of people's interpersonal problems can be categorized into question types (a) - (d).

In fact, we should rename this Stack Exchange site to:

Other subjective sites such as Academia and The Workplace work really well because they accommodate almost any type of question that grad students, researchers, professors, and working professionals have. The restrictions are very limited, e.g. Academia will not evaluate a user's candidacy to graduate schools - other than that, questions that seek help with a decision-making process is very much welcomed, analyzed in great detail, and great answers are often posted within minutes.

However, in my opinion, the strict comment policy should remain in effect, with potentially constructive conversations moved to a chat room, so that that dialogue can continue.

It's time that IPS work to become as accommodating of a subjective Q&A site as Academia and The Workplace. If not, I'm afraid that the strict rules for which questions are accepted will turn IPS into a failed site -- namely, something like Health Stack Exchange, where nobody goes to visit anymore.

TL;DR: I think you're worried about problems that aren't there. IPS is in no danger of becoming a site where nobody visits any more, broadening our scope isn't necessary and 'shog's rules' aren't about what's on- and off-topic, but about how the site should be used to fit into the SE model.

If not, I'm afraid that the strict rules for which questions are accepted will turn IPS into a failed site -- namely, something like Health Stack Exchange, where nobody goes to visit anymore.

Lets take a look at our Area51 stats right now: 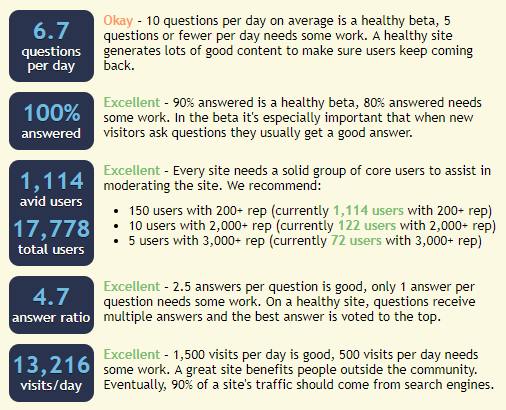 We have over 13k visitors a day, around 6 or 7 questions, all of them get a lot of answers and there's plenty of people with privileges to moderate those questions. Once you reach 5000 reputation points on IPS, you also get access to something called site-analytics. Looking at those, I can see that things like the number of posts, votes, and traffic is stable for a very long while now. So we're in no danger of becoming a place 'where nobody goes to visit anymore'.

Health has stats that are a lot 'worse' than IPS's , but it's not a place 'nobody visits', their stats for visits/day still remain excellent. Right now, it looks like they're struggling with moderating those people that do visit the site. They're in fact trying to narrow their scope, because right now it's considered to be too broad.

Other subjective sites such as Academia and The Workplace work really well because they accommodate almost any type of question that grad students, researchers, professors, and working professionals have.

That's really not true either. Both Workplace and Academia have lists in their help center on stuff that you can't ask about. These include questions that will only ever help 1 person, or that don't meet the criteria for good subjective questions.

questions that seek help with a decision-making process is very much welcomed, analyzed in great detail, and great answers are often posted within minutes.

It's true that Workplace does mention 'making decisions' in their on-topic list, they file it under 'Leadership in the workplace'. But I can't see any evidence that Academia supports all questions when it comes to decision making: they specifically mention not to ask for recommendations, they call them 'shopping questions'. The same goes for IPS: We're not here to tell you what to do. Once you know what you want to do, or what outcome you want to reach, you can ask about it, but that doesn't mean we allow 'recommendations' questions, that are basically asking 'what should I do next'.

We're not 'fighting the needs' of these users. I see a lot of people do a lot of great work, commenting, making sandboxes, inviting people to chat and editing questions, all to get questions fit for Interpersonal Skills. The fact is that this stack is supposed to be about Skills, not problems, not the place you go to for a good rant, a cup of hot chocolate and a hug. We're more than willing to help these users, but we can only help them improve themselves, not influence their environment or control the minds of others. We're not miracle workers.

IPS is already doing that. Okay, maybe not focusing on the 'communications' part of the problem, but on the 'Interpersonal Skills' part. So, we do allow questions about 'relationship advice', as long as they're about e.g. communicating about a big problem, de-escalating a conflict with a spouse, encouraging a boyfriend to stick to their diet/exercise regime.

We don't allow 'phrasing' for a reason: There's a lot of ways people can say stuff. We do allow questions that focus on the skills of conveying an idea, effectively communicating feedback, criticism, feelings.

The e-mail writing is off-topic for the same reason as the phrasing: Would you like writing e-mails for people all day long? They don't meet the guidelines for a good subjective question, because likely every answer is going to be equally valid. We're not an editing service. Yet, there's still questions about online interactions, about using e-mail, chat, sms, whatsapp, whatever to convey messages. Okay, so they're not about 'what should I write in my message', but I'm sure there must be some question out there that asks for e.g. conveying sarcasm through text-based mediums.

As for advice regarding how to handle conflict, we have a lot of questions tagged conflict-aversion, conflicts and there's also the de-escaltion tag. There's questions on apologizing, on setting boundaries... We allow a lot of questions on that already. Yet we can't decide for you what you should do. Every approach is likely to have a different outcome, so we ask questioners to state their preferred outcome/course of action.

Like I already wrote in a comment, those 'rules' aren't about what's on- and off-topic. Those chat messages were written at the time IPS got use of a 'controversial post' post notice. That notice states:

Controversial Post — You may use comments ONLY to suggest improvements. You may use answers ONLY to provide a solution to the specific question asked above. Moderators will remove debates, arguments or opinions without notice.

It was written at a time where people felt they could use IPS as a place to give their opinion, on everything from sexuality ("People can't be gay, that's bad!"), to relationships ("You should break up with him instead of trying to fix this"), Neuro-Linguistic-Programming ("It's pseudo-scientific quackery!"), politics ("You left-winged chicken!")... Ah well, I hope these examples get the message across. If people asked questions that included these topics, the comments would go rife with discussion, and some people even used answers for these kinds of remarks/opinions. Which is not what comments and answers are for, which is why we got the notice.

If IPS ever does decide to become a place to discuss instead of ask questions and answer them, SE will shut the site down because it's no longer fitting their model. So, in conclusion: There's no need to broaden the scope of this site.

Not the answer you're looking for? Browse other questions tagged discussion .

14
Differentiating on and off topic - How?

5
Let's design a community promotion ad!
11
Let's start working on our help center “what to ask” text!
0
How will we know when this site is ready to graduate?
4
What do we delete, and what not?
16
UPDATED: COMPLETED “On Topic” help page contents are live
20
Announcing a Pro Tempore election
2
Reworking the help/on-topic page