Why would a moderator delete a comment to a question which requests down vote clarification?

Within the past day I posted a question regarding a personal experience of mine that I genuinely wanted advice on.

Although I don’t mind getting tons of upvotes on questions, as an experienced Stack Exchange member who has been active on the site since 2013, I realize that reputation is not a big deal.

That said, sometimes if I get downvoted and I would like to know why. I am very aware that asking for a downvote explanation might lead to even more downvotes, but to me I genuinely want to know if the question itself was a turn-off for someone or was there something I could have done to the wording, length or structure to improve things. Or perhaps, some other reason entirely.

So knowing that I posted a simple comment asking the downvoter to explain themselves… And this was fairly quickly removed. Then I posted the request again stating, my original request for an explanation was removed so I am posting it again. Then that was removed as well.

Extremely frustrated since this all happened within the span of a few hours, I have now posted the following comment; screenshot added below for reference as well:

This is now the 3rd time I am reposting this request: Can the down voter please explain the down vote if at all possible. To the mod who has been deleting these comments, depending on my workload today I might start a meta discussion as to why you are doing this and how this is counter to Stack Exchange policies. I am fully within my right to request a down vote explanation especially since I really wish to know if this is the question itself or some aspect of how it was asked. Thank you.

So I guess my blatantly calling out moderators for deleting the comment worked! The comment still stands!

But I am quite unhappy with moderator behavior here. Why the heck did that happen?

These comments were what they were; simple request for downvote explanation that vanished almost as quickly as they were posted. Is there some cultural aspect of this Stack Exchange site that I am missing?

And while I understand some sites and moderators like to clean up comments on a regular basis, my main frustration is these comments were deleted in less than 24 hours after posting. Which seems unnecessarily (excuse the term) anal. I would like to think like a comment to request explanation for downvoting can stand for at least 24 to 48 hours before it becomes a truly stale and fruitless effort. So in total, I think the “strictness” of comment moderation here is self-defeating. The speed of removal seems to imply a desire to have utterly no comments on the site which seems ridiculous. 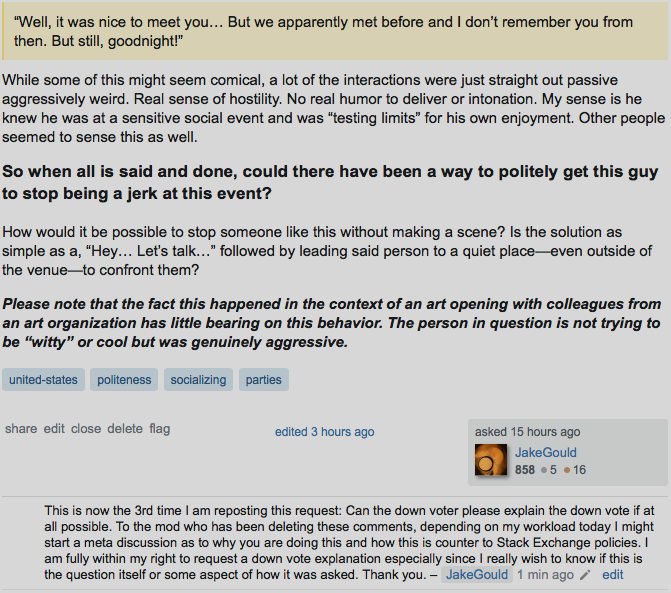 We are pretty strict about comments on this site. They're intended for other users to ask for clarification and suggest (concrete, constructive) improvements to a post, and are explicitly not for extended discussion. We've had many, many previous discussions on IPS about comments - see the comments tag to get an idea.

The help center article on commenting lists a few things not to leave in a comment:

Your request for "why is this downvoted" is arguably the 3rd bullet point there: discussing community behavior. Someone trying to respond to your request would likely fall under one of the first two categories.

I genuinely want to know if the question itself was a turn-off for someone or was there something I could have done to the wording, length or structure to improve things. Or perhaps, some other reason entirely.

...and if they left a comment saying any of those reasons, it would likely be flagged and deleted in short order because none of that is constructive and helpful to improve your post.

The first two are legitimate reasons to downvote IMO. They're similar to saying "This question has no research effort" or "This question is not useful". However, there's not a whole lot of constructive things to say about that to you - maybe "Why do you care about XYZ" for the first reason - but if they weren't already prepared to give you a constructive comment when they downvoted, it's quite unlikely that they will return to your post later, see your comment, and then change their mind and decide to leave useful advice. Given the volume of comments here on IPS I know our users aren't shy about speaking up when they want to ;)

(While the post being discussed here is a question, for answers another very likely reason for unexplained downvotes is a user going "I disagree / you're wrong", and for reasons detailed elsewhere on meta we don't allow those sorts of comments either.)

To put it all together: Your comments were deleted because it's safe to assume that if someone has constructive feedback for your post, they will leave a comment. Unfortunately, sometimes the answer to "Is there anything I can do to make UserXYZ like my post?" is "no" - you can't always please everyone. Asking downvoters to explain doesn't do much to encourage people who already had constructive feedback, but it does encourage "I downvoted because you and/or your question sucks" type comments, which aren't useful.

Instead, if you want advice on improving your question, as the help center suggests, chat is a great way to get feedback on it! And for future questions, we also have a Sandbox where you can get feedback from the community before posting on the main site.

Not the answer you're looking for? Browse other questions tagged discussion comments deleted-comments .

28
How do you tell an answerer that you think their answer needs work?
33
Sandbox for Proposed Questions
0
How strict are we about relevance of comments?
-3
There's no point to down votes if comments to them are discouraged

37
This one weird trick gets rid of all off-topic comments. Let's use it!
5
Should we be deleting questions that have active reopen votes?
3
What constitutes a 'lack of research effort' on IPS?
5
Why were some comments removed?
1
How to give advice to OP when comments are deleted and not moved to chat?
3
How to tell whether comments have been deleted due to moderator action or user flagging
21
Comment deletion on an off-topic question that may be about genuine crisis
3
Should we wait before we flag answers as not backed up?