Stack Overflow for Teams is moving to its own domain! When the migration is complete, you will access your Teams at stackoverflowteams.com, and they will no longer appear in the left sidebar on stackoverflow.com.

Check your email for updates.

What happened in October 2018?

I've recently come back and posted a few answers, and was surprised at the lack of interaction. In fact, this site seems quite dead. Thus I played with the Stackexchange Data Explorer a bit, it's a neat toy. This begs a question. What happened around mid-October 2018? 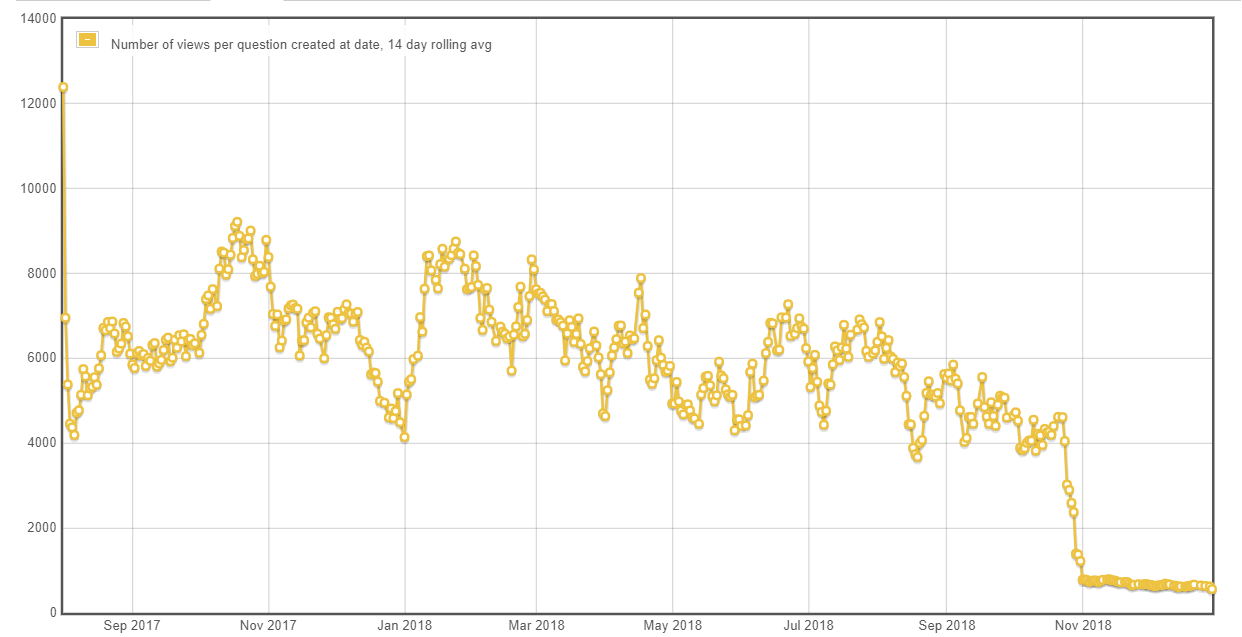 X-Axis is question creation date. Y-Axis is average number of views for questions created at this date. You can display the query here. What is this huge drop in views after October? Same query on The Workplace SE data does not exhibit this trend. Feel free to use the "switch site" feature to try it on your favorite exchanges.

I wondered if this was due to a bug/feature in the pageview counting system, so I probed using another metric, user creation. The curve shows the average number of users being created per day in orange, and the last access of users in blue. This one is from Electrical Engineering. 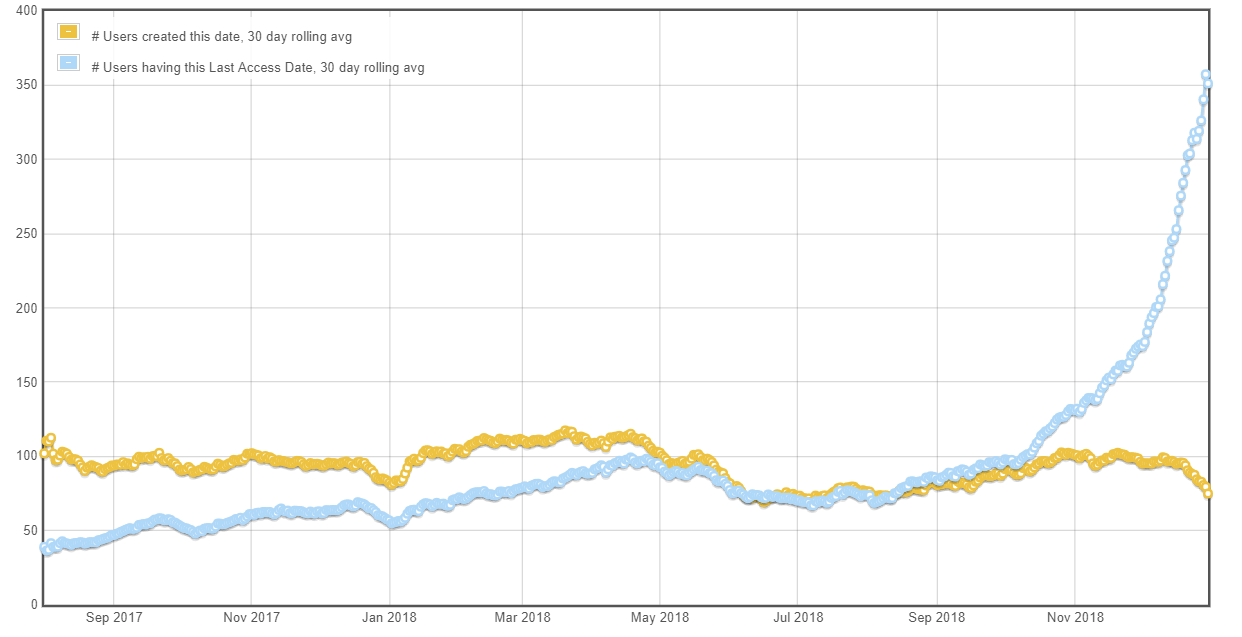 EE gets a steady stream of new users (50-100 per day) and its last access dates are distributed in the usual hockey stick fashion. If you don't know how to read this, point at "Nov 2017" and you see a value of about 50, this means 50 users visited the site on this particular day and never came back since. The rising part of the curve at the right means many users have their last access date in the last month or so, these users are visiting the site often. 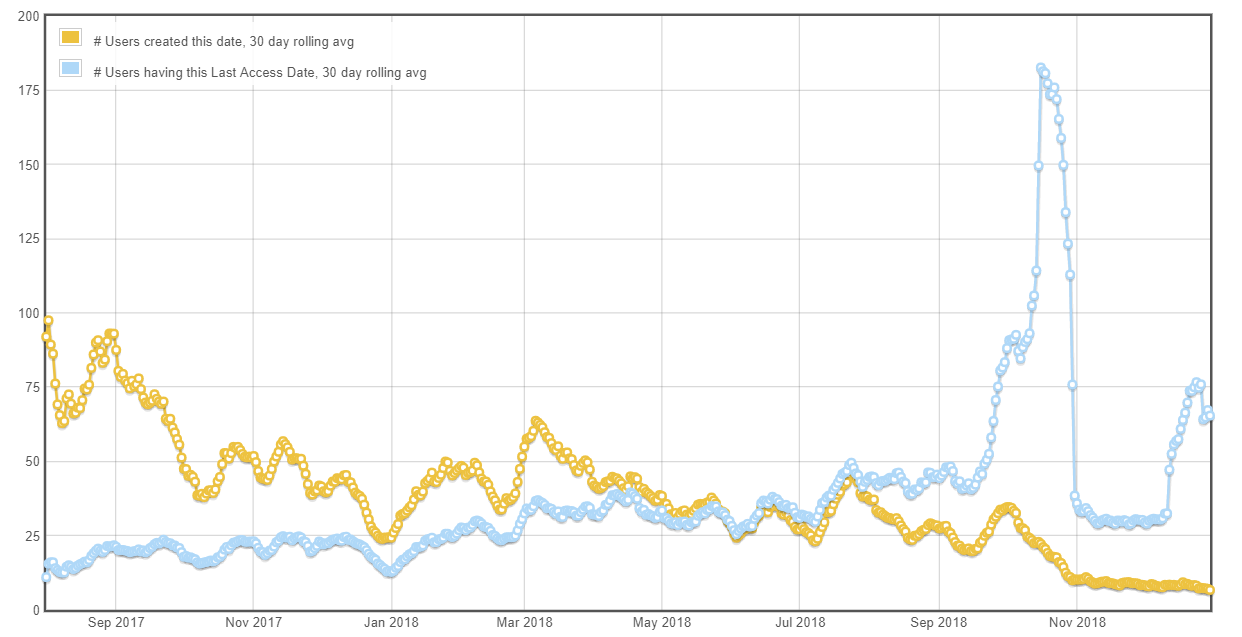 This is completely abnormal. A huge number of users saw something on the site around mid to end october 2018, and they never came back, so their last access date stayed the same until now. Or were they group-banned or deactivated? I plotted user creation on the same graph to be certain that this was not due to a sudden influx of new users. On the contrary, users creation dropped massively.

What did they see that made them not want to come back?

This isn't what you want to see: 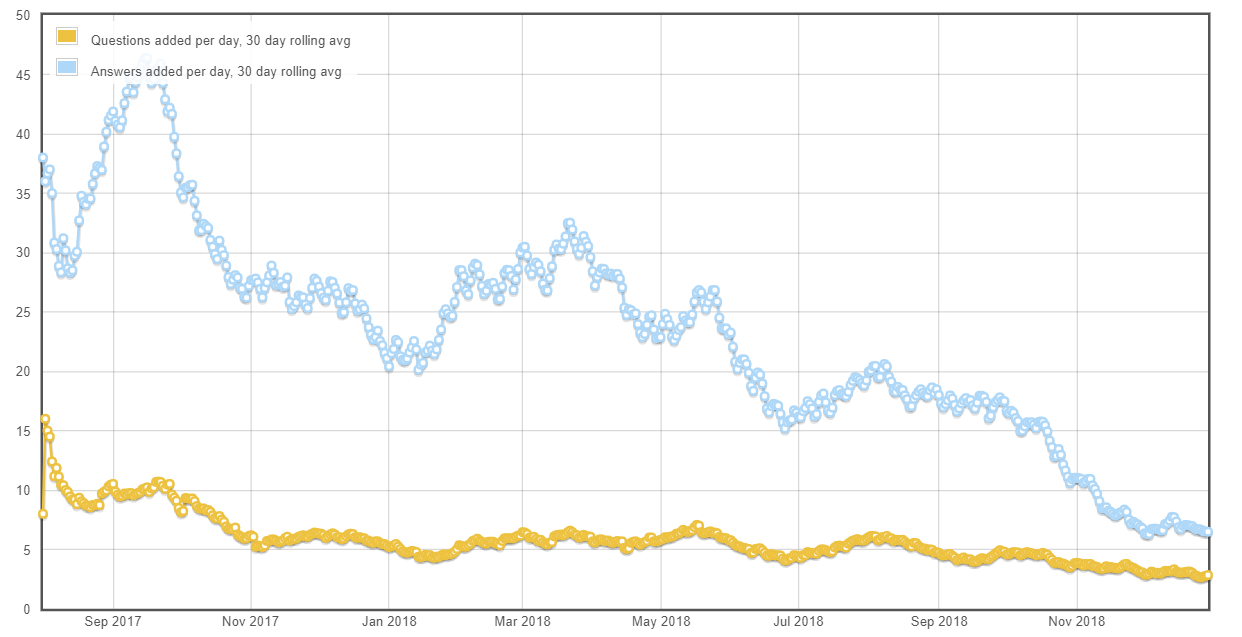 Again, October 2018 seems to suffer from a curse. There was a time questions would get 7-8 answers on average! And now... 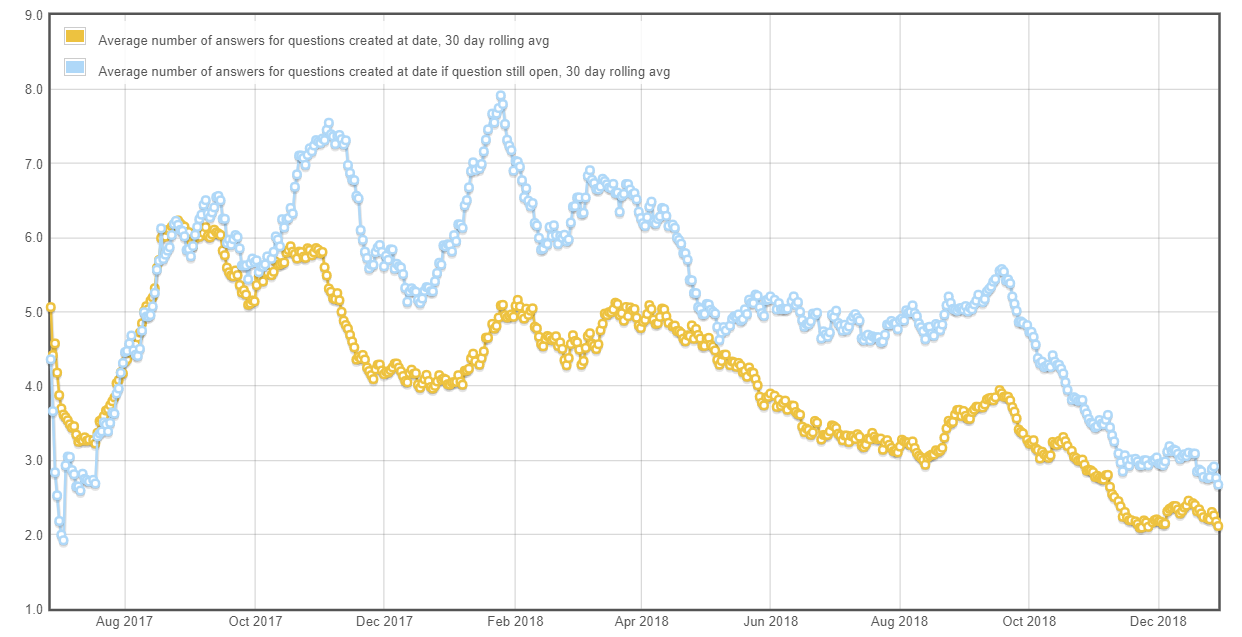 The obvious reason why answers are not posted is that people are no longer posting them. This is the number of unique users posting answers. You want that to be high, not dropping like a rock. 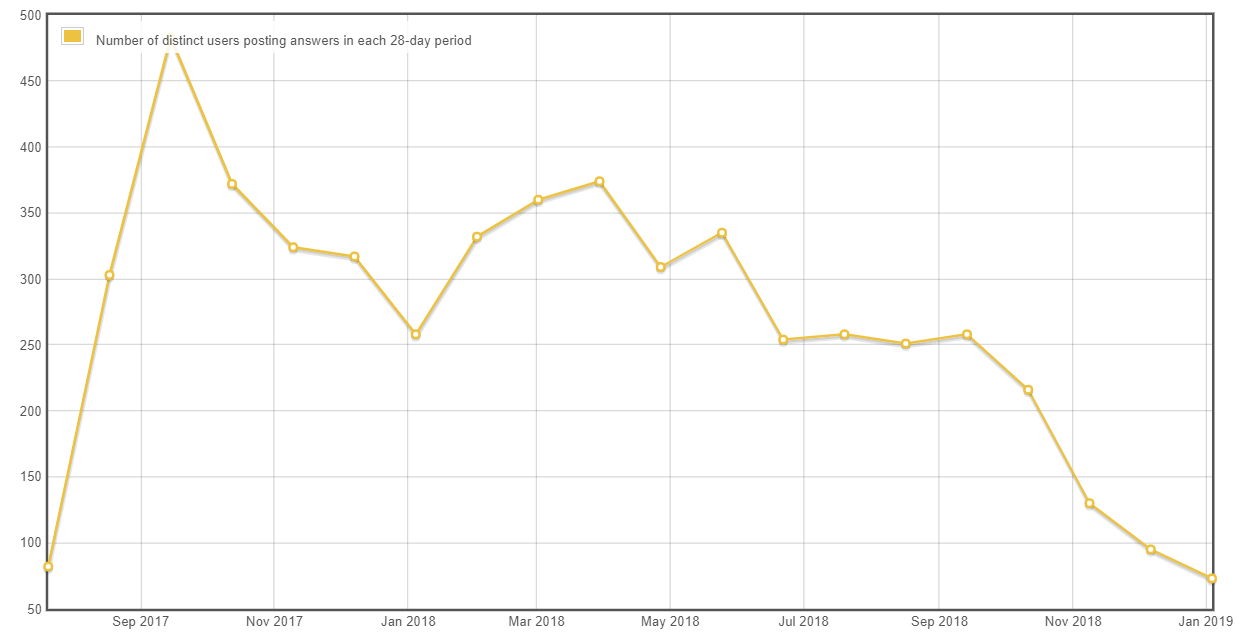 Again, something happened around September or October 2018.

Let's have a look at the whales, ie the users who make the site work. I've cut up the timeline in 28 days slots (4 weeks avoid weekend-dependent data bias) and plotted users who posted 5 or 10 answers in every 28 day slot. 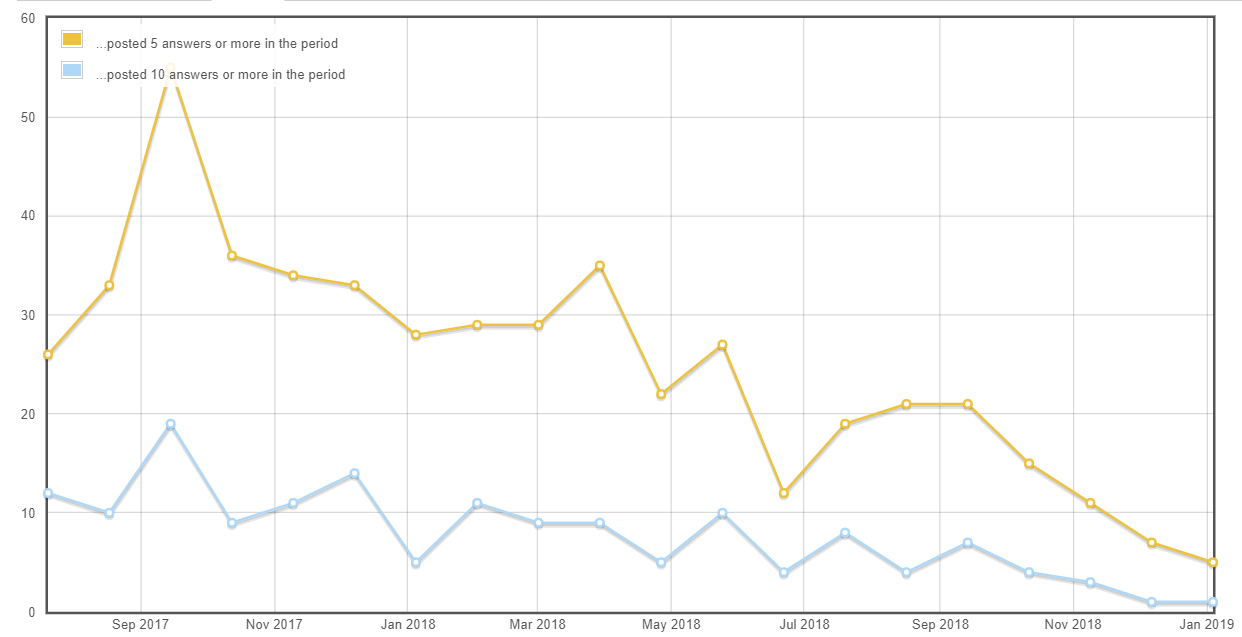 Around September 2017, 20 distinct users posted more than 10 answers each in a 28 day period. The last two blue points on the right are just astralbee all alone. All the other heavy posters ran away. In fact the "most answers in a 28 day period" trophy went to astralbee 6 times and apaul 3 times. 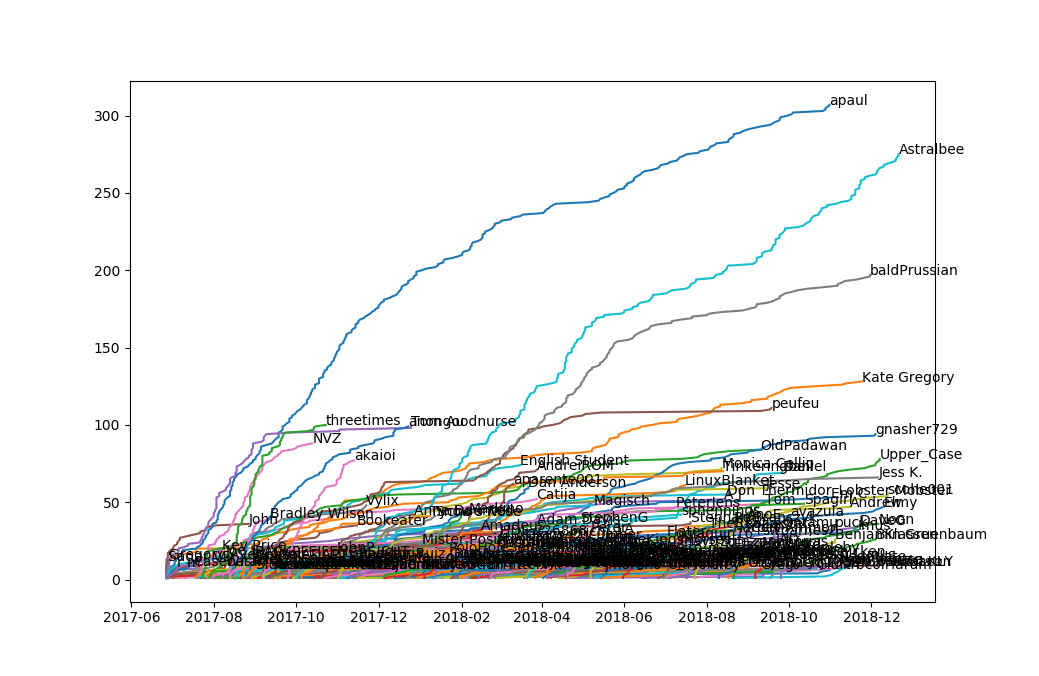 This is a number of answers vs time plot (not reputation). I really gotta give credit to the guy in the upper right corner. Does apaul even sleep? If you're reading that, I must say I respect your determination... or obstination XD

Feel free to use the "switch site" feature to try the queries on your favorite exchanges and compare. Some other exchanges are slowly dying, like EE. Others are going well.

THE QUESTION AT LAST

What happened around mid-October?

(if the data is accurate, of course).

What happened in October was the exclusion of this site from hot network questions. This was also discussed on meta.stackexchange. Since then there has been some discussion about whether IPS even wants to be back on HNQ, with the sentiment leaning towards "Let's stay off for now.".

A lot of our traffic was driven by HNQ. No longer having questions featured lead to fewer people being attracted to this site. In short people are more likely to follow an attention getting posts and nothing attracts attention like a controversial post.

As you can see from the top graph of your question there used to be a lot of variability in the 14 day rolling average in number of views per question before October. I'd hazard a guess that you can find a contentious question associated with every spike in traffic.

Before our removal there were already discussions about how to reduce the negative effects of HNQ on this site. All of ideas that were considered were about mitigation rather than preventing the problem in the first place.

127
What caused this site to be excluded from Hot Network Questions?
30
Does IPS want to be back on HNQ?
14
Do we want to be back on HNQ?
10
Request for 2018 moderation stats before and after HNQ removal
13
What are the data regarding this site's removal from Hot Network Questions? Is this site cleared for potential re-inclusion?
11
2018: a year in moderation

2
Is average reputation score per post a good index of 'impact of contribution' on IPS.SE? What else is, apart from total score?
16
Let's talk with X about Y so we can achieve Z
17
On the HNQ and its effects on the site stats
4
Writing a featured sum-up post to help new users understand the site quickly
11
2019: a year in moderation
5
2020: a year in moderation
10
Why are so many new questions closed and are there plans to change this?